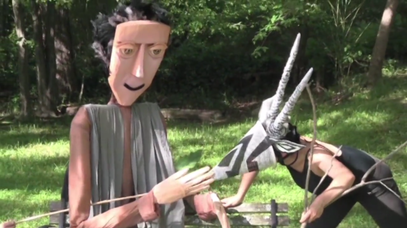 Theatrical Designer, Margie Jervis, is the resident Scenic, Costume, and Puppet Designer for Creative Cauldron of Falls Church and is a Teaching Artist for their educational programs for children. She received her BFA from Rhode Island School of Design in 1978 in Sculpture with a specialty in Glass. Her multifaceted art career spans over 30 years. Her Fine Art has been exhibited and collected internationally in museums with a significant collection in the Renwick Gallery of the Smithsonian American Art Museum. She recently received a 2017 Strauss Artist Grant Award from the Arts Council of Fairfax County for professional achievement.

In 2010, she was also a Strauss Artist Grant Award recipient, launching her participation in the “Passport to the World” storytelling series produced by Laura Hull, Producing Director of Creative Cauldron. These events featured her design and puppetry work in collaboration with modern dancers, actors and ethnic musicians who are tradition keepers in the Washington DC Metro Area. This project evolved into "A World of Stories" touring DC area public schools and continues to do so.

Involved from the beginning of Creative Cauldron's opening of their performance venue at ArtSpace Falls Church in 2009, Margie's work has grown to include design for their many professional adult audience Helen Hayes recommended, nominated and awarded shows. She continues to provide the visualization of Creative Cauldron's original works for their Learning Theater productions for family audiences. Other Design Credits include: the Washington National Opera's productions for young people: “Thunder of Horses” and “Enchantment of Dreams”, Charlottesville Opera’s “Barber of Seville”, “The King and I”, and their Wild Animals for “Magic Flute”. Margie also has collaborated with Keira Hart-Mendoza on costumes for Uprooted Dance's Go!, performed at the Kennedy Center's Millennium Stage.

Margie's training in theatrical design and production was accomplished working for Seattle Opera in the 1980s and 90s in scenery production. She developed a specialty in painting and sculpture and over time, became the Master Scenic Artist in charge of the department.  It is her close connection to the hands on making of art, that continues to inform her design process today.  Her vision of what could be, becomes a reality though her depth of experience, transforming familiar materials into worlds and characters that capture audiences imaginations. 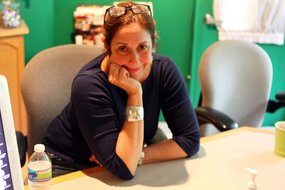 Susan J Goldman is an artist, master printmaker, filmmaker, and teacher. Goldman received her Bachelor of Fine Arts from Indiana University-Bloomington in 1981 and her Master of Fine Arts from Arizona State University-Tempe in 1984. Since completion of graduate school, Goldman has always had a working studio, and other artists have always sought her out to either train them or assist them to produce their work. After moving to Washington in 1990, Goldman taught printmaking at the Corcoran College of Art and Design, MICA, Georgetown University, while simultaneously working for ten years as a Master Printer and Program Director at Pyramid Atlantic (a non-profit center for papermaking and printmaking). Goldman developed many wonderful relationships with artists with whom she had printed with over the years.

​Susan began Lily Press® as a private studio in 2000. In 2006 she realized her first collaborative projects, co-publishing an edition of linocuts with Elizabeth Catlett, producing monotypes and screen print editions with Michael Gross, and in 2010, four suites of etchings with Renee Stout and a portfolio of etchings with Jake Muirhead. From 2000-2012 was Adjunct Professor and Master Printer for Navigation Press at George Mason University-Fairfax, printing for artists William T Wiley, Enrique Chagoya and Karen Kunc. Since 2012 Goldman sustains a full time vibrant studio practice working with many artists including  Renee Stout, Preston Sampson, EJ Montgomery, Eve Stockton, Miriam Morsel Nathan, and most recently, Sam Gilliam. Susan produces and exhibits her own work nationally and internationally. Her work is in private and public collections worldwide.

She is Founding Director of Printmaking Legacy Project ®, a non-profit dedicated to the documentation, preservation and conservation of printmaking practice and history. Goldman received a National Endowment for the Arts Grant 2011-12, as producer and director of Midwest Matrix ®, an hour-long documentary videotape DVD on the fine art printmaking tradition of the American Midwest. With Lily Press®, Goldman as Artistic Director, has created a studio where printmaking can continue to survive, as well as thrive, and has provided a place of community for artists. In doing so, Goldman has established herself as a valuable player in the future of the print. 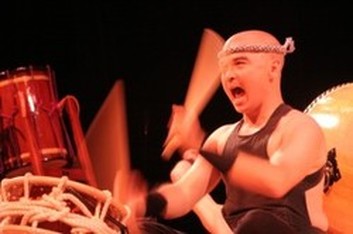 A recent transfer to Washington DC, Mark has performed taiko around the world, taught students of all ages and backgrounds the power and joy of taiko, and led New England’s largest taiko group with his contemporary, hard-rocking style and sense of humor.

From 2008 to 2010 Mark was Artistic Director of Odaiko New England (ONE), New England’s premier taiko group. He joined ONE as a performer in 1998, became a full time staff member in 2004, and 2008 was appointed to succeed founder Elaine N. Fong in the artistic director role.

Mark has worked both on and off stage with some of today’s most renowned taiko performers, including KODO, Marco Lienhard (Taikoza), Tiffany Tamaribuchi (Sacramento Taiko Dan) and Kaoru Watanabe (KODO, KWTC Ensemble). As a performing artist, Mark’s credits span multiple continents and genres. While living in Wakayama, Japan from 2000-2003, Mark performed with local taiko groups including Shippu Uchi Daiko and Kiishuu Ryujin Daiko. He has also performed widely in Europe and the United States as a touring member of Marco Lienhard’s Taikoza. As a composer, Mark has produced original taiko pieces for several groups, including signature pieces “Kashmir”, “Senryu” and “Shin-en”. Mark has also collaborated with other artists and musicians such as Marshall Hughes (Opera Unmet) and jazz trumpeter Tiger Okoshi (Yamaha Artist and Berklee College of Music Professor). Mark’s experience as a performer also extends to elements of production and stagecraft, reflected in ONE’s self-produced concerts “Crossroads,” “Transformations,” and “re-Vision.”

Although Mark is a dynamic and talented performer, his true passion lies with teaching taiko. During his tenure as Artistic Director, Mark was the principal instructor for ONE’s many classes and workshops, greatly expanding the group’s teaching capacity. He led an after school program at Concord-Carlisle High School and designed and led residencies at the Boston Chinatown Neighborhood Center, the Allston Boys and Girls Club and the Roxbury Community College Summer Arts Intensive program for youth. He was also a guest instructor at Wesleyan University, where he established and taught widely popular courses in taiko for five years.

Mark’s own training comes from a wide range of dynamic teachers including Eiichi Saito (KODO) and Ryo Shimamoto (Shippu Uchi Daiko), after whom he models his own teaching style. Mark is excited to share taiko with a new community in our nation’s capital.
Website design by Alison B. Waldman © 2015